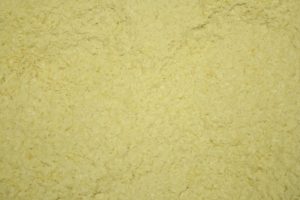 Alhough a considerable quantity of the dried cells are ruptured during the breaking of the dried sheet, the textire of the reconstituted product is acceptably mealy due to the precooking and cooling treatment to which the potatoes are subjected during the processing and the addition of monoglyceride emulsifier.

This process, used today around the world, was invented by American chemists Cording, Sullivan, Willard and Eskew in 1954-55 at the Eastern Regional Research Center (Philadelphia, USA) and was named after them “Philadelphia Cook”

Since the potato is dried in extremely fast one step, cells of the starch contained in the potato, retain their absorption capacity. Of all the forms of dried potato products, only flakes can be recovered with cold water, which was the reason for their widespread use as an ingredient for the food industry, as well as a fast food product.